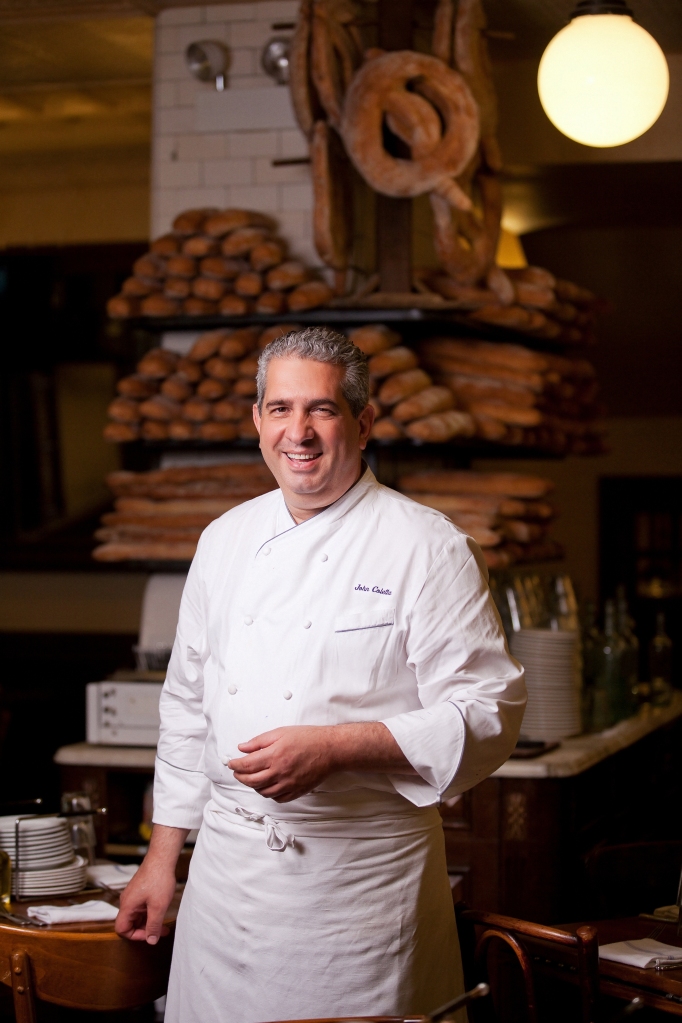 “Where wine is cheaper than water.” – Quartino Ristorante

Recently I had the pleasure of sitting down with Chef John Coletta, the founder, managing partner, and Executive Chef of Quartino Ristorante & Wine Bar in Chicago, and asked him a few questioned tailored to take a peek beyond his official bio at the man behind the accolades.

From his official bio:

The son of Italian immigrants – former owners of a neighborhood restaurant – John acquired a deep respect for food and an appreciation for La Vera Cucina Italiana at a very young age. John’s summers spent in central and southern Italy also cultivated his interest in Italian gastronomy and culture. While spending time in Italia, the concept that meals were the most important part of the day made it obvious to Chef John what his career path would be, “It was a natural evolution for me to become a chef” he recalls.

With his degree in hotel and restaurant management from New York City Technical College, he spent his formative years training with the finest European chefs. He worked at the legendary St. Regis Hotel and Waldorf Astoria Hotel, the Four Seasons restaurant and Le Coup de Fusil, earning his stripes as an apprentice to revered chefs such as Arno Schmidt, Seppi Renggli, Yannick Cam, and Andre Rene. He trained under Alain Ducasse at Louis XV in Monte Carlo, Joel Robuchon in Paris and Three-Star Michelin chefs Pierre Wynants and Pierre Romeyer in Brussels, Belgium.

His first foray into commanding a kitchen of his own as Executive Chef, John earned a Four-Star award from Mobil for his work at Nikolai’s Roof of the Hilton Atlanta. He then went on to reign over an army of 450 cooks in ten different restaurants at Caesar’s Palace in Las Vegas. He was proclaimed one of the four “big guns” of Asian hotel cuisine by the Sydney Morning Herald, while serving at the five-star Shangri-La Hotel in Singapore. An individual gold medalist in the 1984 culinary olympics, and won another gold medal in Frankfurt, Germany in 1992 as part of the Culinary Olympic Team USA. He earned a title as one of America’s Rising Star Chefs by PBS television. He advised the 1994 USA team at the Culinary World Cup in Luxembourg, which earned first place among competitors from around the globe. At the 1997 Epcot International Food and Wine Festival, Chef Coletta shared billing with the likes of Julia Child and Paul Bocuse as part of the Visiting Masters From the World of Food.

A native New Yorker, John’s migration to the city of broad shoulders offered him the chance to join the ranks of Chicago’s top chefs. Opening Entro Nois and Primavera at the Fairmont Hotel and the acclaimed Caliterra restaurant in Chicago’s Streeterville neighborhood as Executive Chef lead to his most promising endeavor. In 2004, John embarked on a partnership with Steve Lombardo and Larry Shane to realize his vision of a classic, urban-Italian ristorante. John infused Quartino Ristorante & Wine Bar’s seasonally-driven menu with authentic regional preparations of rustic Italian recipes – many of which date back more than 200 years. His preparations of house-cured and aged Salumi, such as Sopressata, Salamette Pancetta and Duck Prosciutto, along with cheeses made daily in-house, are a nod to John’s love and respect for La Vera Cucina Italiana. In short, with the creation of Quartino’s menu, John stayed true to the same culinary philosophy that he has held since the beginning of his career: Prepare Italian food with Italian passion.

Quartino opened its doors in December of 2005 and is now entering its eighth year of showcasing the flavors and traditions of Italia’s most vibrant regions to Chicago diners. Quartino is the recipient of the coveted Ospitalita Italiana, which is awarded by the Italian government and recognizes restaurants which uphold the traditions of Italian culture.

In 2005 Chef Coletta authored and published 250 True Italian Pasta Dishes, a cookbook dedicated to his passion for La Vera Cucina Italiana. A passion for authentic Italian products has lead Chef Coletta to be the national spokesperson for Carmelina Pomodori e Polselli Farina, a true expression of Alimentare Italiane.

Chef Coletta saw and continues to visualize Quartino as the ideal vehicle for synthesizing the insights derived from his childhood immersion in Italian cooking and his classical training. Coletta strives daily to continue achieving his goal to, “Honor humble authentic Italian dishes and present them as they are meant to be experienced.” 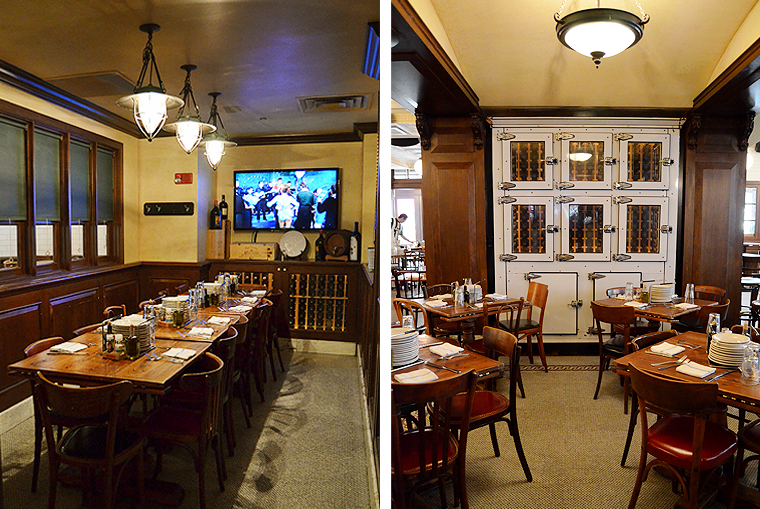 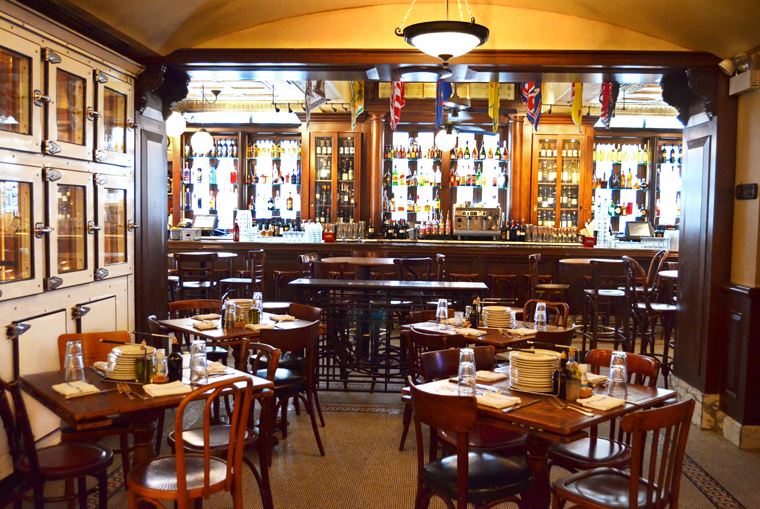 The moment you step into Quartino, you are immersed in the vision of Chef Coletta, and if you are in luck he will stop at your table to ask how you are enjoying your meal, to which you will respond, full mouthed, that you are enjoying it very much. His impeccable approach to Italian food culture comes through in every bite of marvelous food, and in every inch of his magnificent Ristorante. I rate it an A++ for the uncommon blend of relaxed, friendly atmosphere and rigorously prepared, uncompromisingly authentic Italian cuisine.

Q. Where did the name Quartino come from?
A. Quartino refers to the glass carafe of 250 ml. known in Italian as a Quartino, a quarter liter of wine.

Q. Do you have a favorite dish at Quartino? Why?
A. My favorite preparations vary through the seasons. The preparations which express the inborn natural flavors found in the season’s harvested vegetables, fruits, fish or cheeses served at their optimal flavor point are truly memorable cravings.

Q. How old were you when you started cooking?
A. I began cooking at the age of 15 alongside my father. He then arranged several apprenticeships for me at the St. Regis and Waldorf Astoria Hotels in NYC.

Q. Do you have a specific memory that stands out from being in the kitchen growing up?
A. I have a vivid memory seeming as if it were yesterday!! There was a discussion in the kitchen of the Waldorf Astoria on a Sunday afternoon with a very diverse group of seasoned international chefs who had varying levels of culinary supervisory responsibilities at the Waldorf Astoria. The topic of being able to cook thru varying economic levels. The agreement was that a chef must be able to cook luxury foods in the best of times with precision and expertise, in challenging economic times chefs must be able to prepare foods which are approachable and less celebratory with the same level of enthusiasm, knowledge and focused execution.

Q. What or who are your influences?
A. I am driven and influenced by the requests and needs of our customers and staff. In the event a customer finds our pasta over or under cooked is terribly concerning to me or the temperature of our fish is improperly stored will greatly affect the experience of our customer and greatly impact the decision of the customer to revisit Quartino. I am obsessed with our customers complete experience.

Q. What is the most essential item in your kitchen?
A. There are many essential items in the kitchen. The crucial item is a sharp knife, without it, a dish has little success of being prepared properly.

Q. Is there any one ingredient you hate to work with?
A. I refrain from utilizing inferior raw materials, since the results can never be positive

Q. If you weren’t in the restaurant business, what do you think you’d be doing?
A. This is a great question!! I never really thought or considered doing something else. Food and wine are a consuming subject which require my attention daily.

Q. What do you cook for yourself and your family at home?
A. I enjoy cooking seasonal foods. The results are truly magical and my family and friends believe that I am a superior cook. The fact is that the seasonal ingredient is superior allowing for a noteworthy experience. I believe that 70% of superior cooking is the direct result of having a superior product. The addition of a focused and executed technique represents 30%.

Q. Name three wines you love to drink.
A. I enjoy drinking wines which compliment foods. Therefore, when I select a wine I prefer to drink a wine that is indigenous to the region from which the food preparation hails from. This is very achievable assuming that you are in Italy, France or Europe. This being said and understood, I do have a preference to the wines of Lombardia and Piedmonte.

Q. Other than Quartino, where do you like to eat in Chicago?
A. My first choice is Pelago without a doubt. I also love Spacca Napoli and Piccolo Sogno

Q. If you could have dinner with anyone, who would it be?
A. I enjoy having dinner with my wife Jenifer and our children and my partner Steve Lombardo and his wife.

Q. Where would one find you on your day off?
A. Usually I am visiting a supplier, producer or grower. I also enjoy visiting produce markets.

Q. Are you close to other Chefs from being in business so long? If so, who?
A. My free time is very limited and is usually spent with my wife and two children. However, I do have many great professional relationships with many, many chefs. To name a few; Mauro Mafrici of Pelago,Tony Priolo of Piccolo Sogno, and Tony Mantuano of Spiaggia ,

Q. What excites you most about the Chicago food scene?
A. Chicago is the Best city in the world with the best chefs and restaurant operators in the world. Food in Chicago continues to be the catalyst which drives visitors, conventions and meetings to this great city. Our food suppliers, vendors, producers and growers are passionate and focused allowing us the distinct privilege of cooking with superior raw materials and transforming them into memorable experiences.

Q. What’s the one food you can’t live without?
A. I believe the technical answer is water and or salt. Placing this aside, my favorite food is pasta which clearly requires the usage of water and salt.

Q. Best vacation you’ve been on?
A. The best vacations are the ones where my wife Jenifer, our daughter Olivia, our son Christian and I rent a house. I go to the local markets and purchase seasonal fresh foods. Prepare them with simple cooking techniques allowing us the opportunity to eat together as a family while discussing a variety of events.

Q. What’s on the top of your bucket list?
A. I want to spend quality time with my wife and children.

A truly genuine man, Chef Coletta is a Chef by nature, and fully committed to his love of family, and by extension, his love of caring for his patrons as if they were family. Wherever your reservations are tonight, cancel them and head over to Quartino.