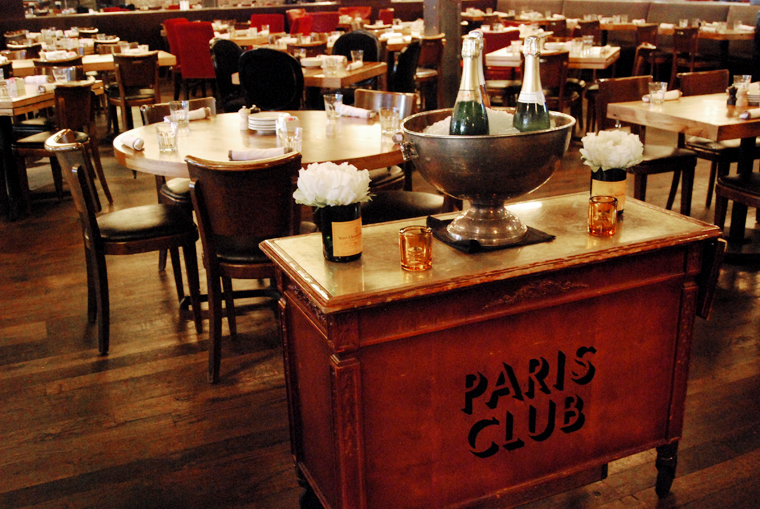 I have to confess that even before arriving at Paris Club, I knew I was in for something special.  When I started this blog I was living in Europe, where I was inspired by the variety of cuisines that were all around us; my favorite of course being french food. As I first stepped into Paris Club, I was whisked away to a French bistro by the soothing dark wood finishes, warm, subdued lighting, brass hardware, and exposed black ironwork girders that reminded me of the Eiffel tower itself.  The long, Parisian-style bar and leather upholstered chairs contrasted with the gleaming white subway tiled walls creating an authentic urban Paris feel.  The spacious dining room was divided into two large rooms, the furniture reminiscent of a 1920’s cafe. The only thing missing is the jet lag! 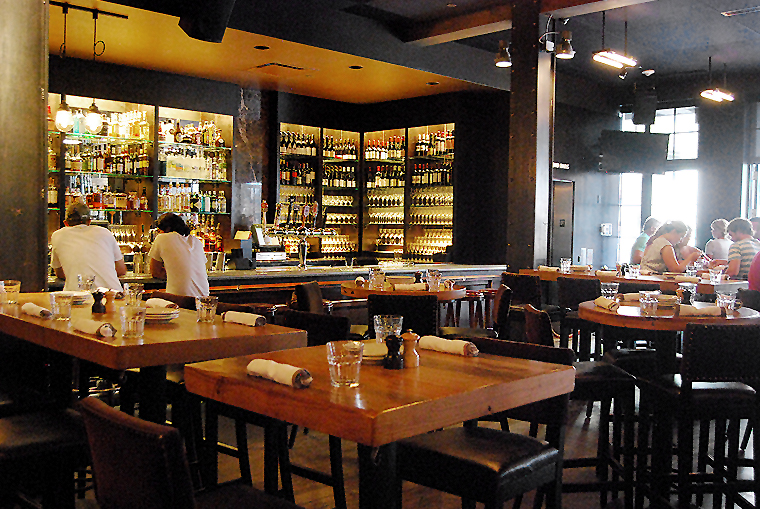 We were greeted at the door by an attentive hostess and waitstaff.  There was no rehearsed “I’m so and so, I’ll be your server today”; instead, a very chic and presentable server in a small, neat black apron and black shirt; polite, self-assured, and soft-spoken came to our table to welcome us and offered to take our drink order. We started with the ‘la colombe’ French-press coffee. It arrived at our table a minute later as our waitress pressed it just before filling our cups. In addition to the coffee we ordered two apéritifs, the Parasol and the Champagne punch. The Parasol was a light, elegant sparkling wine cocktail flavored with lillet blanc and st. germain liqueurs and honey. The slightly sweeter Champagne punch, c.1862 was flavored with pineapple, raspberry, and lemon. Both were delightful and just the thing to open up the appetite. 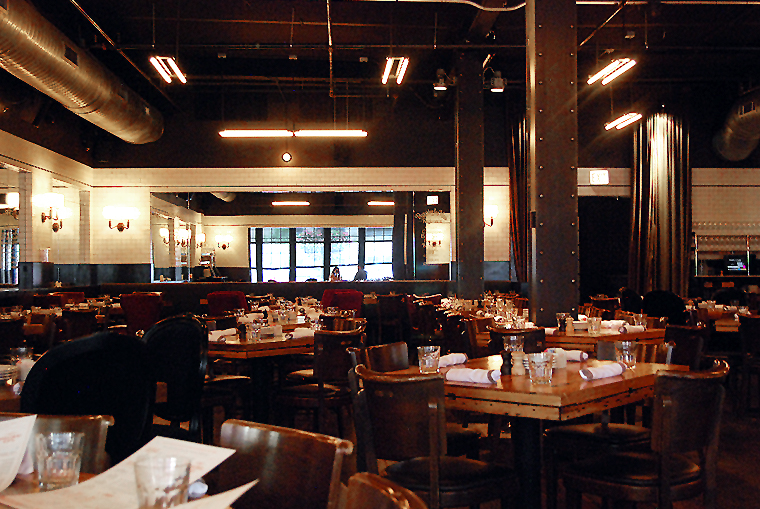 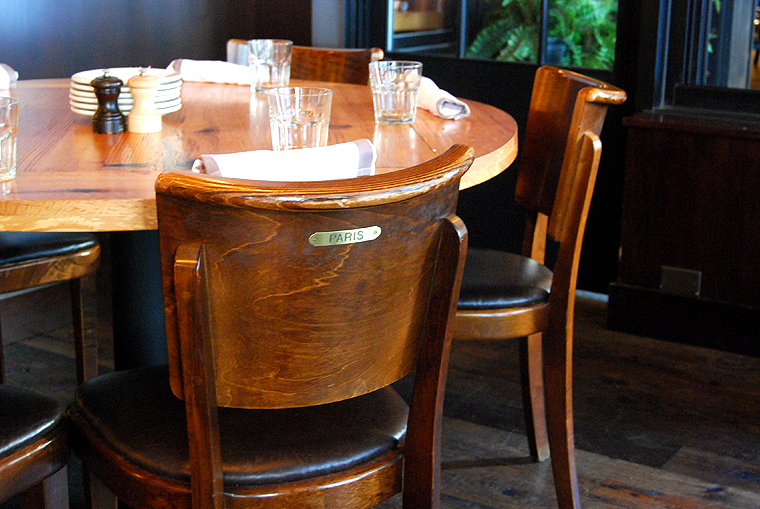 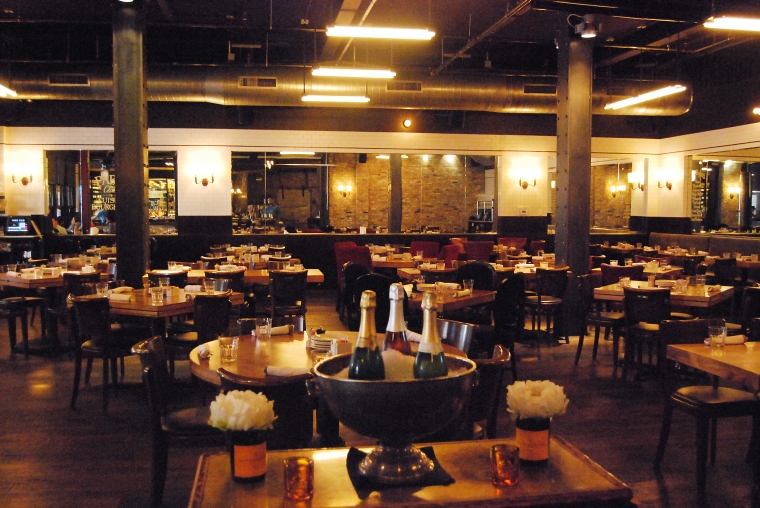 The first dish consisted of oeufs au plat which arrived in a small cast iron skillet and consisted of two gently cooked eggs with tender sliced fingerling potatoes and generously sized cubes of succulent fried pork belly, topped with a delicate frisee salad and accompanied by three hearty slices of a rustic farmhouse-style bread. Artisan bread of this quality is something that we miss terribly since moving back to the states. The other dish was a classic eggs benedict, with house-cured ham on top of tender brioche with a velvety hollandaise and two expertly poached eggs, alongside three savory, deep golden-brown hashbrown fingers.

Having dined in France quite a few times while living abroad, the delicate techniques and refined flavors were spot-on and the service was truly impeccable. Paris Club succeeds in presenting classically-inspired French cuisine to the lively River North area right in the heart of downtown Chicago, and at very reasonable prices. 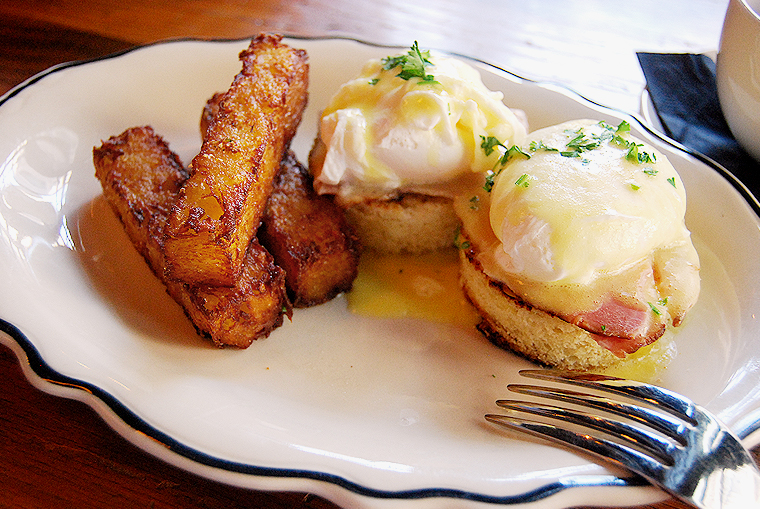 French Chef Jean Joho teamed up with restaurateurs RJ and Jerrod Melman to bring a taste of authentic French bistro to Chicago. Chef Joho, born in Alsace, France began his formal training at age 13 at L’Auberge de L’Ill, and later studied at the Hotel Restaurant School in Strasbourg while continuing to perfect his skills in kitchens across Europe. He currently runs 3 restaurants in addition to the Paris Club; Everest in Chicago, Brasserie Jo in Chicago and Boston, and The Eiffel Tower Restaurant in Las Vegas.

Leading the kitchen is Executive Chef Alex Ageneau. Originally from the Vendée region of France, Ageneau started his culinary career as an apprentice charcutier at the age of 15. At age 18 he set off for his culinary journey working with some of the world’s top chefs in France, London, Los Angeles and Chicago. At the age of 22 he was promoted to sous chef for Patina in Los Angeles and later worked with David Feau as executive sous chef at The Royce. Ageneau now heads the kitchen at the Paris Club where taking cues from his French heritage, he brings his personal style of cooking to some of his favorite traditional French dishes.

Chef Alex Ageneau said in an interview with River North Beer “I love traditions. I look at it with a critical eye, because some traditions are no good…but the roots of terroir are there, and they’re there to guide you. It’s about taking the tradition, without living in the past and adapting those traditions to today’s palates and tastes. I think when you have a beautiful culture it’s important to have respect for terroir that’s been going on for thousands of years. I’m very attached to my roots and where I come from. I just try to grow with it.”

Paris Club receives 5 stars in my book. The wonderful atmosphere, the pleasant and attentive wait staff, the splendid cocktails, and of course the magnificent food were all perfect. It truly is like going to Paris for brunch without hopping on a plane.